Von Wolfgang - Mai 29, 2008
This is (or should be) a banjo blog. So I added some banjo to the guitar and here is "Carrickfergus Up Speed".
Kommentar posten
Mehr anzeigen

Von Wolfgang - Mai 27, 2008
This beautiful song plucks every Irishman´s heartstrings, as Patrick told me when we played it in Flintbek.
I tried to record it at 80 bpm - as a training for me to keep the rythm and a chance for you to join in at a given speed.
Here is the audio file.

And I tried to make my first movie with moviemaker. Ok, this may not deserve a price as an action movie but I wanted to give it a try (Thank you James for your prototype!).

Von Wolfgang - Mai 21, 2008
In Old Time Banjo Playing there's a technique called "the cluck" which is done by hitting the strings not over the head or anywhere over the fretbord but more or less exactly over the 19th fret. By doing this the "old men" produced some clucking sound which is really old timey to my ears. Mostly this is done on a banjo with a scooped neck. Mine isn't but I tried it anyway. Here is my rendition of "Cluckin' Hen".
If anyone would like to add some guitar (or else) to it, feel free to do so. (Audacity will help you).
Kommentar posten
Mehr anzeigen

If this is of any help for you, I would be happy if you write a comment (just click at "Kommentare").
And it really would be great hearing you accompanying this on your banjo.
2 Kommentare
Mehr anzeigen 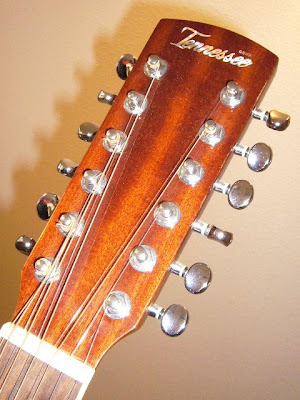 Way back then, when I first managed to frail three chords in a row I always wanted to find someone who could accompany my practicing on guitar - but didn´t find any.
Not even in the internet I could find mp3-files with just one instrument for which I could play the accompaniment.
Now thinking of the Transatlantic movement ( so to speak) I had the idea to record my 10 string

for those who would like to accompany it with their banjo.
As I know that I'm always tending to become faster while playing, I took my earphones and switched them to a metronome which I set at 110 bpm. So my playing is - more or less - this speed.
Here is "The Wreck of the Old 97". Anyone may play - and sing - to it.
You may find lyrics and chords here.
I would be very happy, if you could record your playing (Audacity) and send me your mp3 or publish it in the internet.
Have fun!
If 110 bmp is too slow for you, you may use winamp with PaceMaker as a plug-in. Thus you can change the speed without altering th…
2 Kommentare
Mehr anzeigen

Von Wolfgang - Mai 15, 2008
According to my local newspaper, scientists did some research on music and drinking at Heriot-Watt-University in Edinburgh.
As a result the psycologists recommend red vine (Cabernet Sauvignon) for "All Along The Watchtower" (Jimi Hendrix), "Honky Tonk Woman" (Rolling Stones), "Live And Let Die" (Paul McCartney and Wings) but Chardonnay for "Atomic" (Blondie), "Rock DJ" (Robbie Williams), "What's Love Got To Do With It" (Tina Turner) or "Spinning Around" (Kylie Minogue).

I would recommend Scotch with the pipes and Bourbon with the banjo - or earplugs against pipes and banjo (Dick, please forgive me).
Kommentar posten
Mehr anzeigen

Von Wolfgang - Mai 07, 2008
For those who didn´t read Steve´s comment to my last post, here is the song with him on harmonica. It seems to me that this version is a bit faster than the others. Maybe that´s only an idea caused by the "lots of" new instruments. I should compare the versions closely. Anyway, I like the song when it´s slow.
Kommentar posten
Mehr anzeigen

Von Wolfgang - Mai 05, 2008
Pat added his wonderful dobro sliding to "Blue Eyes Crying in the Rain"!
So the "Transcontinental Jam Session" now consists of Father Keith on banjo, Pat on dobro and vocals, the author of this blog on guitar, banjo and vocals.
Here is the song.

And we are waiting for the next participants - what about Dick and his pipes?
2 Kommentare
Mehr anzeigen

Von Wolfgang - Mai 05, 2008
After a family holiday in the "Wendland" we´re home again. We did some biking, watching, listening and cake eating at the "Kulturelle Landpartie". See my photos on flickr.
There were apple trees in full blossom, blue sky, artworks of every kind (from photographs to paintings to sculptures to wood carving to pottery to music). Yes, even music. Amongst others we enjoyed very much the klezmer band "A Glezele Vayn".
And I attended a harp workshop. No, not bluesharp, but celtic harp. Three visitors including me (there were bigger groups too, we just were lucky) were taught the very basic of harp playing by Thomas Breckenheimer.
We started with "Alle meine Entchen" (German childrens song), then did a song about apple blossoms (a German traditional which I didn´t know till then) and ended up with "Mairi´s Wedding", a Scottish song. Unbelievable that it was possible for me to play (with mistakes but play) songs on this instrument which had about…
Kommentar posten
Mehr anzeigen

Switch over to English

Von Wolfgang - Mai 05, 2008
As the English speaking readers of this blog tend to win the majority, I will post in their language from now on (except news which only refer to regional issues).
Kommentar posten
Mehr anzeigen
Weitere Posts

WITH THIS BLOG I WANTED TO BUILD A HOMEBASE FOR THE GREAT AIM OF HAULING PATRICK COSTELLO TO KIEL. WE DID IT. IN OCT 2007 HE WAS HERE. WE HAD A GREAT TIME. SINCE THEN THIS IS A NORTH-GERMAN BANJO-BLOG TRYING TO HOLD THE COMMUNITY TOGETHER

My second hobby is photography. You may find my photos on flickr. And yes, there are some banjo photos too.

To learn more about this project, read my post of April 27th, 2008 and the following posts.