Von Wolfgang - Dezember 28, 2009
They finally tie the knot. Today Stephen, well known frailer from Newcastle, will marry his Laura. Be brave, Stephen! May you have courage enough to do the few steps to a new future.
When thinking of his walk to the altar those famous tunes came to my mind: Wedding Marches
I sent the piece to the bridal couple and Stephen wrote that he is planning to play it at his wedding party. Hopefully it will not spoil the night. Maybe it would be wise to play it for a "last dance".

Best wishes to you both - and may there always be a banjo within his reach, for better or for worth.
Kommentar posten
Mehr anzeigen 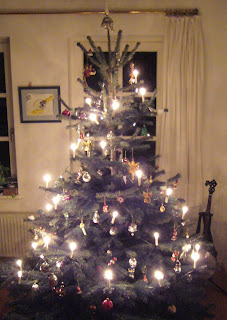 Had a wonderful Christmas, although the banjo has to be put aside for a few days:

Von Wolfgang - Dezember 16, 2009
Couldn´t believe my eyes when I saw this on Patrick´s blog. And then I couldn´t believe my ears.
I tried this tune in April and made it up by listening to M. J. Miles´ wonderful CD. At this time I didn´t know that there were tabs too. But I am afraid, I would not have played it as beautiful as John from Chicago does even if I had tabs. At least I can tell myself that he´s playing it from tabs which I didn´t have...
Will more practice bring more beauty? I´ll try...
Kommentar posten
Mehr anzeigen

Von Wolfgang - Dezember 12, 2009
Pat W. , a friend from the 2008 Crisfield retreat, gave me important informations for my quest for the clawhammer tone:
"If what you are wanting to hear is a more plunky like a lot of the modern clawhammer players, I would suggest that the fiberskyn may not be the right head for your banjo. The fiberskyn is a dry sound and not very resonant. I personally like the fiberskyn sound as it cuts a lot of overtones. I think you want to try a Renaissance head. The Ren accentuates the midrange of the instrument more and I believe would be a better fit for what I believe you are trying to achieve. The Ren is more resonant and produces more of a note when struck.
The other thing I would suggest is to actually tap tune the head to A# when you put it on. I usually start by tuning it to G first and then bring it up to where it first hits A#. The A# works well because that note is rarely
used on the fretboard so is less likely to create wolf tones. To tap tune the head, set the banjo in your la…
Kommentar posten
Mehr anzeigen

Von Wolfgang - Dezember 06, 2009
Maybe it´s not a problem for you, my dear reader, but since I´m playing my Saga I was looking for improving it´s sound.
Changed the top (now it´s a fiberskyn head), changed the strings from steel to nylon and back to steel again, looked around for another banjo: This beautiful baby made by Neil, or one of Karsten´s great instruments (but definitely not one of those 10.000 bucks pieces you can find here).
Always I am insecure if I need another banjo to achieve this plunky old time sound I like most – or is it just my way of hitting the strings? Softer is better? But softer is harder to do for me.


Just now I came upon a totally new problem concerning the sound.
I used to go to a nail shop to get some acryl on the finger nails because that makes them stronger and it´s easier to do some finger picking on the guitar with acrylic nails (t.m.h.o). So I got a strong frailing nail too. A while ago I decided to stop tuning my nails because I tend to play more plectrum guitar now. Now the acry…
1 Kommentar
Mehr anzeigen
Weitere Posts

WITH THIS BLOG I WANTED TO BUILD A HOMEBASE FOR THE GREAT AIM OF HAULING PATRICK COSTELLO TO KIEL. WE DID IT. IN OCT 2007 HE WAS HERE. WE HAD A GREAT TIME. SINCE THEN THIS IS A NORTH-GERMAN BANJO-BLOG TRYING TO HOLD THE COMMUNITY TOGETHER

My second hobby is photography. You may find my photos on flickr. And yes, there are some banjo photos too.

To learn more about this project, read my post of April 27th, 2008 and the following posts.